an excellent project has a soul

With their film installation “7 Days” the Munich-based artist-duo M+M are combining the means of the cinema and its possibilities of psychological penetration with the interest of art in the inclusion of a real space and body. They drew inspiration from the spatialization of narration with its potential of transversal and parallel references, as was the case in Giotto’s frescoes 700 years ago.

7 Tage (7 Days) is a work that is made up of 7 films, one episode for each day, drawing inspiration from scenes of 7 different feature films that were shot between the Sixties and the Eighties including Jean-Luc Godard’s Le Mépris (1963), John Badham’s Saturday Night Fever (1977), and Stanley Kubrick’s The Shining (1980), with each film dedicated to a particular day of the week. The double simultaneous projection of each day/scene creates an enigmatic and unexpected effect due to the antinomic presentation. Two versions of the same dialogue or of the same gestures of the couples adult/child, man/woman, father/daughter, husband/wife, young woman/old woman, father/mother, homosexual/heterosexual generate uncertainty and lead one to reflect on the ambiguity and instability of interpersonal relations and of the different meaning of words and actions according to the context.

The sound level contributes significantly to the spatialization and the inclusion of the viewers. On some days of the week there is a strong sound level instead of music, making the presence of an object more visible from a physical point of view. On other days the music is overwhelming and radicalizes the psychic inscrutability. 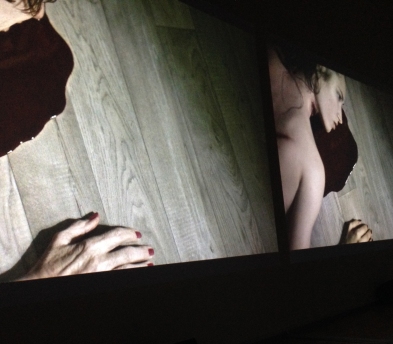 M+M frequently combine different media in their conceptual-oriented work, from photography, video, and film, through sculpture, to architecture and projections in public spaces. Their activities have in recent years focused on multimedia installations.